Bo Diddley's mk2 Gretsch.
Inspired by traditional 'cigar box' constructions, Bo Diddley made his first
home made guitar, 'Tube Amp Assassin' from a dismantled wood cabinet radio receiver
using his own hands and rudimentary tools.
In the 1950s Bo, known as 'The Originator' created the legendary 'Bo Diddley Beat'.
"Shave an a haircut, two bits!" was the two-bar phrasing with no chord changes that he used.
He also introduced tone and attack innovations giving his sexual,
driving rhythms their hard-edged sound.

Guitar makers Gretsch made their licensed version in the 1980s. 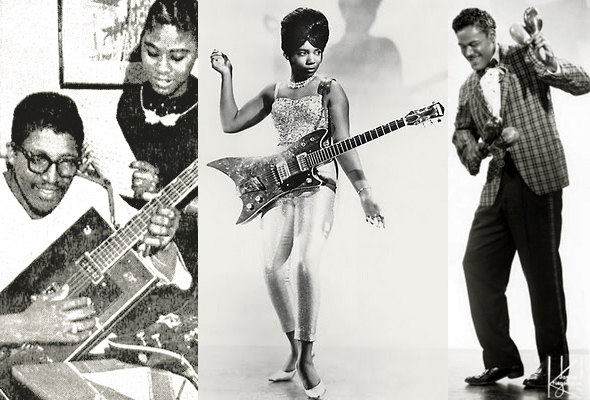 His band featured guitarist 'The Duchess' (replacing 'Lady Bo' in the 1960s), his sensual
young ladies 'the Bo-ettes' and the echo laden double maracas of dancer Jerome Green, who was
the young Mick Jagger's inspiration. The Stones supported Bo Diddley on tour in England, 1963.
A few gems: 'Bo Diddley', 'I'm a Man', 'Who do you Love', 'Pretty Thing', 'Mona',
'You Can't Judge a Book by Looking at the Cover'. 'Road Runner',
CLICK
'Hey Bo Diddley' TV performance 1964. 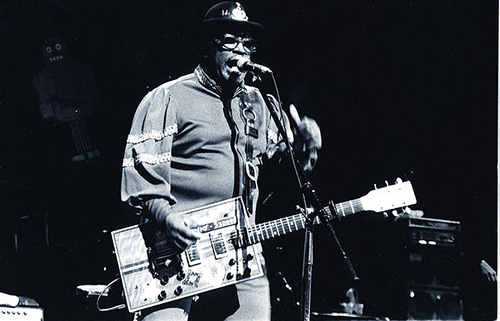 Bo Diddly with 'The Twang Machine'.
He performed live for over fifty years, finally succumbing in 2007.
Surrounded by family and a gospel choir singing his songs, his last words were
"Wow, now I'm going to heaven."

Minimilism...
a broken down Farfisa organ and a cheap-o drum machine.

Martin Rev and Alan Vega's Suicide certainly made a virtue out of their skeletal,
synth-punk, minimilism. "Frankie Teardrop" from their first album, was an extreme experience, scary.
A Viet vet blue collar suicide song delivered as a tortured monologue over a speeding pulse.
"This is the one with the worst effect. Last time I listened to it, I puked.
I went fucking nuts." The Slugkid. 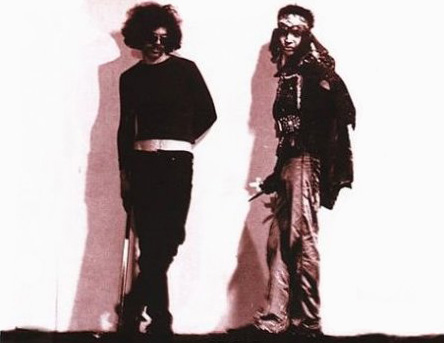 They were the prototype for most synth outfits like Cabaret Voltaire, Joy Division etc. but
none had their dangerous sound, or their uncompromising integrity.

Minimalism...
"Metal Machine Music" was also of the minimal kind,
seemingly with minimal appeal as well.

Slated, on its release in 1976, as a perverse step too far with no redeeming features.
Lou Reed's double album of atonal noise was created using continuously looped analogue guitar feedback,
hums, drones and screeches. Was it really just a cheeky way to deliver the remainder of his
contractual obligation with RCA records?
Sub-titled 'The Amine Ring' it's also said to be a serious exercise in 'drone' guitar and
modulated 'noise' from his earlier experiences (through John Cale) with avant garde composer,
La Monte Young and involved laborious tape editing and re-mixing.

Lou Reed and finger.
"In terms of execution, comprehension and conception - it exists both as a work of art, a
portal to the avant garde and a prime example of a rock star showing off." Paul Morley.
When it was released in 1976, I eagerly listened to a bit of all four sides.
They are all relentlessly similar... but different.
I have the double album on vinyl, still in its original shrink-wrapping.

Bizarrely, in 2002, German conductor Ulrich Krieger of classical chamber ensemble Zeitkratzer,
laboriously transcribed it as an orchestral score. It was then performed at the Berlin
Opera house by Zeitkratzer with Lou Reed on guitar. Highly rated in avant garde circles they
continue to perform it, now with a light show, throughout Europe. It was released as
a combined DVD and CD of the performance. 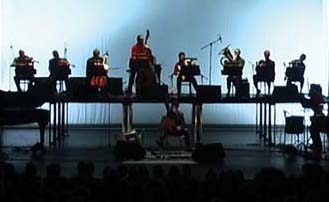 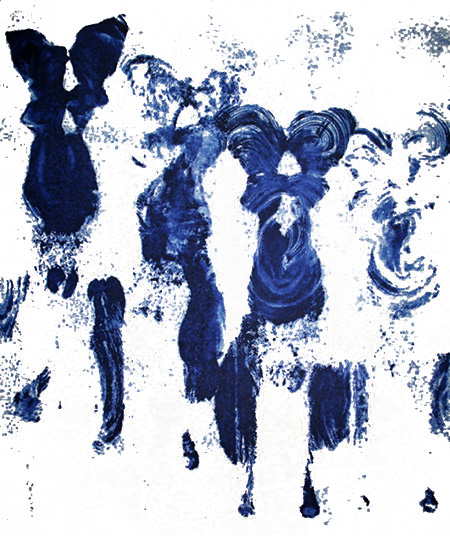 Frenchman,Yves Klein, did minimal.
He painted whole canvases in one colour: his own patented
Klein International Blue. He used young women's naked bodies as living paintbrushes.
He composed 'The Monotone Symphony' featuring one chord sustained for 20 minutes
followed by 20 minutes of silence (the void).
The gallery performance was filmed as an excerpt for the movie 'Mondo Carne'.
The film-makers should have respected the compositional integrity of the music but
they introduced a dubbed melodic sequence instead of sustaining the chord.
Unfortunately, after watching the premier when it was shown in Cannes,
Klein died of a heart attack.
He was very upset over the disregard shown for his musical composition.
CLICK
The Yves Klein Performance. 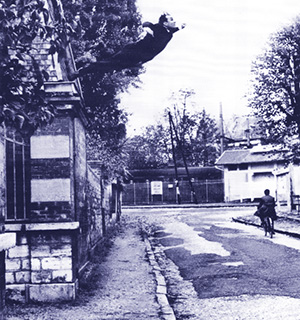 The genius, Klein, leaping into the Void.